How I Conquered Kilimanjaro

My journey to Kilimanjaro started with a dream I had as a boy. It started when I first read the Ernest Hemingway short story called “The Snows of Kilimanjaro”. I was enthralled by the text and couldn’t stop thinking about it for years. Someday I knew I would see this snow-capped mountain in Africa myself.

I know my younger self would be proud, as these days I catch myself staring at the certificate on the wall above my desk at home. It reads:

Nevertheless, I would like to share a little more about how it came about. For quite a few years, I had been taking approximately two months off and visiting different parts of the world. This particular year I had chosen Africa. Along with my quest to climb Kilimanjaro, I aimed to cross the Sahara Desert and spend time in Egypt with the Pyramids. These were just a few of my wishes for this journey.

After successfully crossing the Sahara Desert and seeing the Pyramids that pictures do not do justice to, I started to work toward Kenya. After arriving, I reached out to a local agent and secured all that was necessary to climb Kilimanjaro.

Now, my quest to reach the peak of Kilimanjaro began!. At first, I purchased a good walking stick, which I found to be one of the most useful tools for the trek. This was not my first attempt at mountain climbing or tracking so I knew how important a good walking stick is. I recommend a walking stick regardless of where you are climbing in the world. I also made sure that I had the proper clothing. In this case, it was Gore-Tex, which is extremely good for cold-weather and bad conditions. I had an excellent pair of walking boots and gloves to make sure that I would be warm enough as I climbed further and further up the mountain.

With all my gear ready to go and courage at an all-time high, I was ready to make the attempt. It’s approximately a three to four-day climb depending on what side of the mountain you’re taking. Experience also plays a large factor. My first two days were much easier than I anticipated and it made me optimistic for the rest of the climb. Although the grade continued to get steeper and steeper, my guide, August, and I continued up Kilimanjaro. It was a strong incentive to see the mountain get closer as the hours passed. There was rare vegetation along the route we took. August mentioned that it could only be found on the Kenyan side of the mountain.

The nights spent on Kilimanjaro were particularly special. The camaraderie was in abundance, as fellow climbers all shared their own stories and ambitions to reach the peak. I shared my boyhood dream of reaching the peaks of this wonderous mountain with each group we joined with. A group from Norway shared my excitement of reaching the peak but mentioned they were waiting for more favourable conditions. We were from all walks of life spanning the globe and Kilamanjo brought us all together.

We stopped at a stone building to rest before our final ascent. The plan was to start the ascent at approximately 11 o’clock at night so that we could see the sunrise at the summit. Before hitting the cot to let my body rest, I decided to do a walk around the compound and take it all in. I didn’t know when I’d be back in this majestic place and wanted to take in as much as I could. However, after a small walk, I began to suffer from a nasty case of altitude sickness. I made it back to the stone building with our cots but my insides felt like they were being torn apart and I could barely hold myself up. Before heading inside to the others, I rested outside the door of the building.

I’m not sure how much time had passed but I was greeted by August. He took a quick look at me and knew immediately what the problem was. He put his arm around me and said, “It’s just a little mountain”. I don’t know if it was the shock of August’s words or the rest, but the pain had begun to subside. I returned to my cot for a proper laydown and prepared myself for the final phase of Kilimanjaro.

As we started up the ascend, we were in what we call The Shale. The only way that we could continue going up was to go back and forth just like if you were skiing. I’ll never forget when I asked August if we could stop for a moment. I was sure was only a minute or two at the most, but I heard him say, “Moshe!” which means move. To my surprise, the front of my outfit shattered with a small sheet of ice that had covered it in that short time. I understood at this moment that even standing still was not an option at this altitude. I then asked him how much further and he said it was about an hour to Gilman’s Point, which is known as the saddle of the mountain.

Many climbers will mark Gilman’s Point as their accomplishment. It is an incredible point to reach and an achievement all on its own. However, Uhuru Peak was the true summit we were aiming for. We were able to stop at Gilman’s Point for a very short rest. At that altitude, no amount of rest is enough and before I knew it, my tired body continued toward the summit. I had often wondered why climbers moved so slowly as they approached the peak of the summits they were conquering. It wasn’t until I experienced myself did I truly understand the impact altitude has on your body.

My body was literally being starved to death from lack of oxygen and every effort to move forward was an accomplishment. I continued to put one foot in front of the other for what felt like a lifetime. My walking stick supported the weight of my body more than I anticipated. God bless that walking stick. A lack of movement from August ahead of me broke me out of my trance. He was looking at me with a big smile. We had made it to the top of Kilimanjaro.

Our time at Uhuru Peak was short. Just enough time to take a few pictures and soak in the climb I had just completed. The few of us on the summit were strongly encouraged to get off the summit as quickly as possible and back down to Gilman’s Point by our guides. We understood the risks of staying too long and closely listened to their instructions. After a quick rest at Gilman’s Point, we went back through The Shale. I was absolutely exhausted. So, with my walking stick high above my head for balance, I leaned back as far as I could without falling into the mountain and ran down The Shale.

In no time I was back at the familiar stone building refuelling my body with orange and a well-deserved cookie. The group from Norway was still there waiting for their ideal weather. They were impressed, saying “Last night we watched you climb up the mountain but today we watched you run down it”. They let out a laugh. While they were impressed with our ability to complete the climb, they didn’t realize how tired I really was.

The sheer enjoyment and challenges that I experienced climbing Kilimanjaro will stay with me forever. I was able to conquer the snow-capped mountain that I had dreamt so much about as a boy. I truly hope you get your own personal moment at the summit.

READ THE LATEST FROM MY BLOG

A Lesson on Online Scams

In today’s fast-growing, ever-changing communications, whether it’s the old phone, cell phone, tablet, laptop, or PC, we are now being inundated with a scam. Without

This essay is a true account of a remarkable woman. We have all been spending more time at home due to the virus. I have

The Girl From Ghana

What I’m prepared to share with you today is something that changed my life forever. I was with a group of Canadian Ambassadors for World Vision in 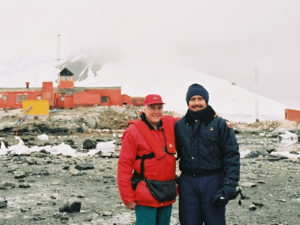 Meeting The Commander of a Chilean Outpost in Antarctica

I’d like to share the story of when I got a picture with the Commander of a Chilean Outpost in Antarctica. So it goes with