Meeting The Commander of a Chilean Outpost in Antarctica 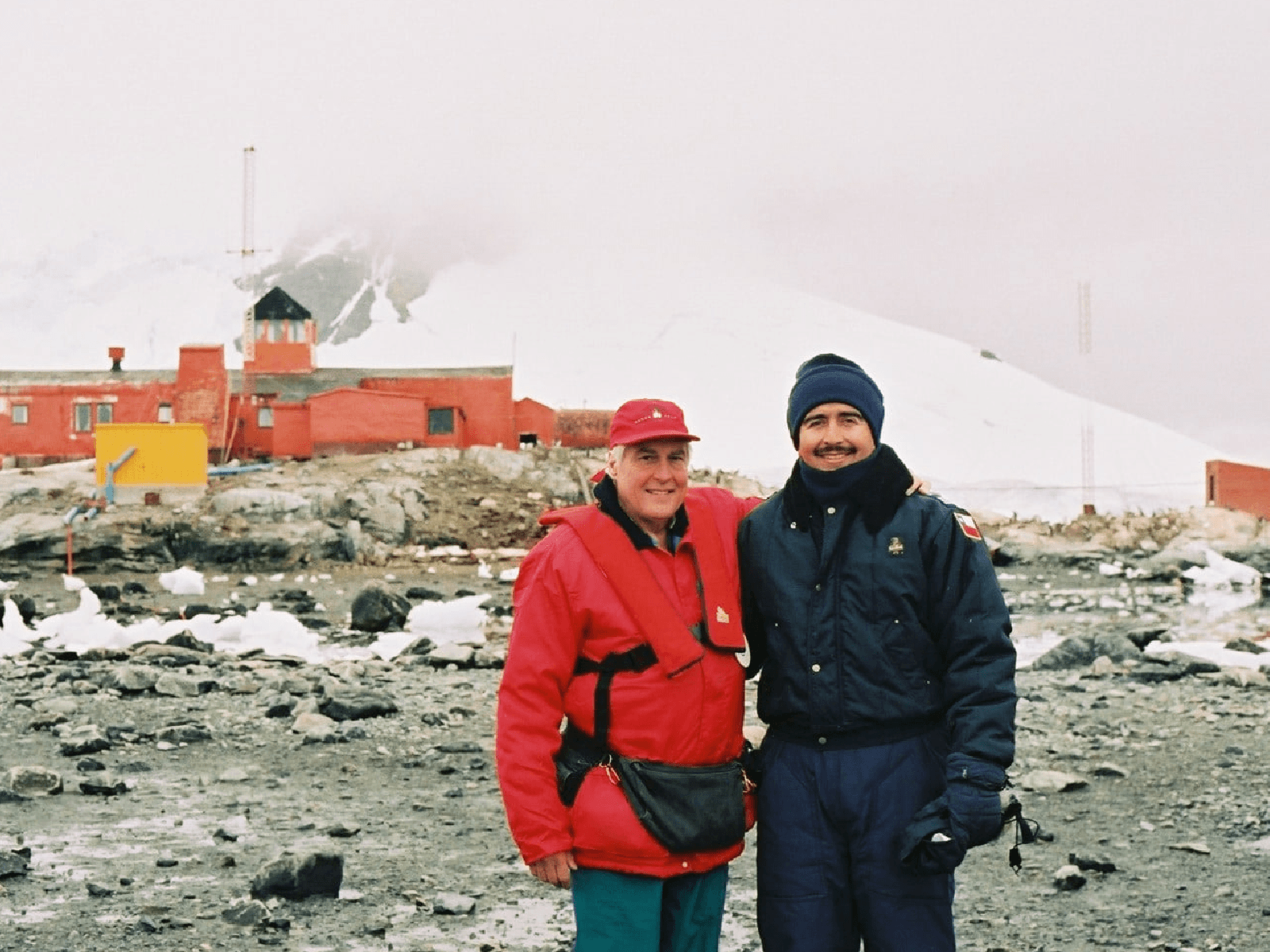 I’d like to share the story of when I got a picture with the Commander of a Chilean Outpost in Antarctica. So it goes with any story about travel, it begins with the journey there…

My Journey to Antarctica

It was a two-week voyage with a small icebreaker that had been converted into a passenger cruise ship known as the Marco Polo. This ship and a few others are the only ones that can dock in the Antarctic. Understandable, due to the environmental conditions that exist in the region. Anything less than an icebreaker wouldn’t make it very far. To get onto the mainland, all passengers had to transfer onto a small transport raft that would skip across the frozen waters below.

The zodiacs were the vessels of choice that would eventually take us to the Outpost.

Now before I continue on, I’d like to give more context into what exactly these Outposts are and how they function. There are many requirements Countries have to follow when setting up one of these research posts in the Antarctic. It’s common for research expeditions to be for six months. Everything a researcher brings with them, and I mean everything, for their six-month journey must be taken back with them and off the Antarctic landscape.

During this time, the research post is under rigid control to protect staff from the potential dangers of the outside. Many of the months are spent in a total blackout due to the rotation of the Earth. During these blackout periods, extreme caution is used. Facilities at the outposts are connected by narrow passages and under no circumstances are any of the staff to venture away from these passages for safety reasons. The outposts are managed with great efficiency to conduct their research and have procedures set in place that respect the near inhabitable environment they work in.

Face to Face with the Commander

I was eager to make my way from the Marco Polo to the outpost. Once the zodiacs were prepared for us, I took the opportunity to take one over as soon as possible. Once we landed, something particular caught my eye. A whale skeleton! I quickly made my way over a beach of rocks and ice to what was left of the magnificent beast.

As I examined the extensive remains of the whale skeleton that had beached itself on the shoreline, the commander worked his way down to join me. To my delight and surprise, he spoke perfect English. After introducing ourselves, we talked about his homeland, Chile. I think he was equally surprised that I had visited most of his country and even the city he called home. Due to my relationship with his country, we bonded as instant friends. I remember talking extensively about the great wines that Chile has to offer, the beautiful coastline, and the charm of the Chilean people.

After our conversation by the whale, the Commander asked me if I would like to visit their Outpost. I quickly accepted his offer with delights knowing this was a once-in-a-lifetime opportunity, and I enjoyed his company. The Outpost was not that large. A few personnel were busy working on computers or grabbing food from the small setup kitchen. He told me that as a scientific Outpost, they were always under a lot of pressure to ensure their research delivered a new understanding of the environment and species of the Antarctic. Before making my way back to the zodiacs, the Commander and I got a picture.

In closing, I would like to share something of interest about the local wildlife. In the location of the Outpost, there were many, many penguins. I believe they were the Magellan Penguins. These little rugged penguins build their nests in the hills along the coastline with rocks they find on the beaches.

However, what is unique about this site is the Chilean personnel have erected a cross on one of the hills. I assume it is to remember Jesus Christ and his crucifixion, as most of these men would be Catholics. The cross was joined by a pilgrimage of these little penguins making their way up the hill. This was a journey I’ll never forget!

READ THE LATEST FROM MY BLOG

A Lesson on Online Scams

In today’s fast-growing, ever-changing communications, whether it’s the old phone, cell phone, tablet, laptop, or PC, we are now being inundated with a scam. Without

This essay is a true account of a remarkable woman. We have all been spending more time at home due to the virus. I have

The Girl From Ghana

What I’m prepared to share with you today is something that changed my life forever. I was with a group of Canadian Ambassadors for World Vision in

Why Artificial Intelligence is Our Future

PrevPreviousWhy Artificial Intelligence is Our Future
NextThe Girl From GhanaNext